Here is that Interview I did with underthelotus.com. Their website seems to be having some trouble at this time. So I put the whole interview up for you guys to see on my website, sorry for the delay. 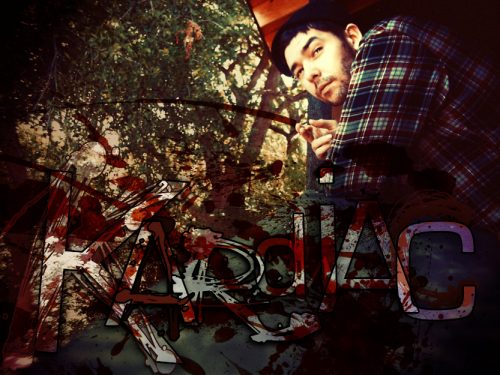 1.  When did you realize music was your life’s path?

Answer: Well I started going to a lot of Hardcore/ Metal shows when I was around 12 years old with my older brother Shawn he played in a bunch of different bands. I guess from that, I myself started to play an instrument “Drums.” I played in a few different Hardcore/ Punk bands when I was a teenager, but nothing ever really came of it. So, when I was about 15 years old let’s say 1997/98, that’s when I downloaded my first studio recording program and started out producing beats. My first demo was called “Symptoms of Death”…it was horrible lol. I recorded it onto a cassette tape through a cheap ass computer microphone. What really put the stamp on me pursuing music was when I was driving home after doing a guest appearance on 91.3 WVKR Poughkeepsie NY college radio. That show is well known. Artists like “Cage” have been up there when it was called retard riot radio. We are from the same shit-hole town “Middletown NY”. Anyway, I heard my song, “Death within Sex” get played for the first time on radio, and I would be lying if I said I didn’t bug out. It was big for me at the time. Right then was when I knew for sure this is what I wanted to do.

2. What do you relate to or draw your inspiration from when you are performing and recording?

Answer: Well, when I’m performing I draw off the crowd’s reaction. There have been good times and there have been not so good times, but overall my music is very aggressive. Between that and the crowd, that’s where I get my inspiration from. Now, when recording it’s different. I listen to the emotion of the music and determine from there how to approach the song. Every beat has a different vibe it gives me, so when I’m recording, my songs never sound the same – from voice, to lyrics, for the most part it’s constantly changing.

3. Do you create/produce all your own beats?

Answer: Not all of them, but I do produce my own beats time to time. Recently, I’ve been working on a solo album and so far I have 9 songs completed for it. All the beats are produced by me.

4. Do you write your own lyrics? If you do, what is your motivation behind them?

Answer: Yes, I write all my own lyrics and I have been since I started writing. One thing I will never understand is those people who get ghost writers. Like wtf is the point of that? Is it because they’re lazy? Or are they so fake, and their life sucks so much, they have nothing to write about. My motivation comes from everyday life situations. I make sure to put facts into my music or else what the hell am I talking about. The thing is that my writing changes day by day and the outcome sometimes depends on what kind of mood I’m in. When I write shit about drug abuse, ex girls friends etc, that’s coming from my life’s experiences. The real horrid and fucked up shit comes from a part of my heart I like to name KARDIAC. It’s my way of releasing anger and displaying it in music. For the most part, there’s just a few things I would love to do to some people, but we live in a world with laws and it would suck to live in prison for the rest of my life. So, music is my inspiration to get rid of that feeling before someone gets hurt. I have a select few fair weather fans that are stuck in the past and won’t let go of my old shit. If I sounded the same as I did in 2002, I probably wouldn’t be doing this shit anymore because I would be bored of it. Every artist needs to grow and that’s the only way keep the interest alive. As a “REAL” fan, you’re supposed to grow with them, but not everyone sees it that way I guess. For the fans who support my shit fully, if I feel like doing something that’s not my ordinary style, the ones who keep supporting – those are the ones I keep doing this shit for.

5. How has music helped/hindered your life?

Answer: About 2 years ago, my life was surrounded by nothing but shit. It was a living hell for me because I was going through some real serious fucked up shit. I’m not going to get into details, but I stopped writing and recording for almost 4 years cause of it. When it came time for me to better myself or just wait it out and die, I choose to better myself.  My music was the only thing that got me out of that nightmare. It may sound really corny, but I can honestly say music is one of the main reasons why I’m still here and even doing this interview today.

6. Who are your biggest influences musically and non-musically that shaped you into the artist you are today?

Answer: Damn… Well first off I would say my older brother, Shawn. He always gives me the brutal truth. Even when there are times I do, or don’t want to hear it, I always need to hear it. It’s good to have someone like that around because most of the time people are afraid to tell you their honest opinion. It keeps the ego grounded. I don’t really listen to music to get influences from I actually try to stay away from music when I’m in the process of recording an album. That’s only because I feel it would take some of the originality away from the project. If there was a gun to my head and I had to pick someone, I guess I see myself in a bit of Marilyn Manson. His lyrics are in-depth and sometimes emotionally brutal as are mine – emotion is everything in a song. Give a reason why you’re disemboweling her, don’t just say it – put a little emotion behind it and it will make people pay attention. When I’m writing something gory, I always try to explain the vivid details as graphic and descriptive as possible while keeping away from the cheese factor of it. Sometimes it’s too descriptive where it makes it hard for me to finish the sentence I’m writing. I was compared to Alice Cooper once but I don’t see it.

7. You are an Underground Rap artist, but with its vast numbers of different styles, what sub-genre in the industry do you consider what you perform is?

Answer: Shit… This is kind of a hard one to answer. My music at times has so many different styles to it – to just minimize it to one genre, I would be lying. For the most part, I guess I would call it Horrid Rap, but then again it’s not all dark. I feel “Pigs of New York” is an uplifting song lol. Then, I have some Dub-ish all through “The Afternoon of extravagant Delight”…some of that is not even rap music. If you get a chance, check out my music video “The Nest.” You’ll see what I’m talking about. My genre, I guess, all depends on what kind of mood I’m in that day.

8. What do you consider music to be to you?

Answer: Drugs, My Therapist, My First Love, My First Hate, My Anger, and My Life!

9. What are you plans in the immediate future for you and your music?

Answer: Push my latest release “BLOOD HOARDER” as much as I can, and get Unrestrained Sounds established through all our different services we have to offer. Music Distribution, Graphic/Web Designing, Beat Production and Film.  So far, things are going pretty smooth. My manager/co-owner of Unrestrained Sounds, April Bedan, has been in contact with many different companies/people. We have a lot of things planned within the near future, and the name is getting out there. Things can only get better.

10. Where do you see yourself with your career in the next 5 years?

Answer: Hopefully still alive. Lol. Anything can happen in the next 5 years – the future is undetermined. My goal though, for the next 5 years, is to keep putting out good music, and to expand my name and company to as many people as humanly possible, do a couple tours and even travel overseas to rock some shit. We’ve got the connections, but it’s all about being able to finance everything to make it happen. I guess we’ll see in the next 5 years.

Answer: It all depends…what the contract agreement is for and how many albums and years would I be stuck in it. If I was able to keep doing the music that I do and the contract was right, I probably would. Therefore, I would make Unrestrained Sounds even bigger as a Sub Label. Many people say they’re going to stay underground for the fans until that money is thrown in their face. I, myself don’t want to be stuck owning anyone shit because that’s what usually happens. Some artists can’t afford lawyers, so they don’t read through the loop holes in their contracts and most of the time they end up getting fucked.

12. What do you hope your fans and those who listen to your music get from it?

Answer: A different experience in each and every release that they can relate to with what I’m saying. Maybe some hopeless schmuck with a gun to the head listens to my music and says to him/herself damn I thought I had it bad and then decides – not today. Even more so, I hope they’re satisfied and they get their money’s worth, and become a recurring supporter of my disturbing art.

13. If there was just one thing you had to say or get out to your fans, what would it be?

Answer: Thanks for being just as sick and fucked up in the head as me. You’re the ones who keep me alive. I hope you all get something out of my music…even after I’m dead! 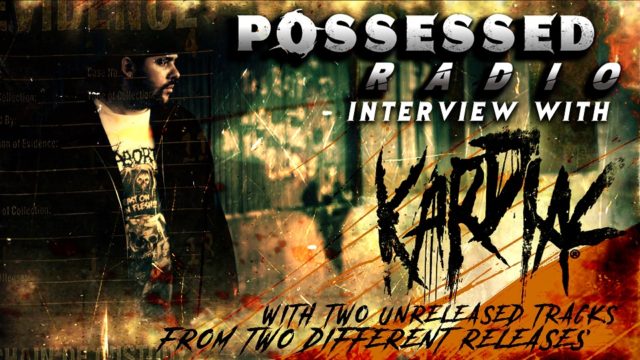